Why is Natural Hazard Mitigation Important?

Most people have been affected by natural hazards in some way. Blue Earth County and its residents are vulnerable to a variety of hazards including tornadoes, floods, extreme temperatures and severe winter weather. 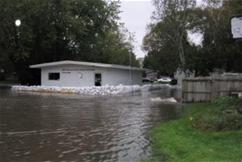 While these hazards cannot be prevented from occurring, mitigation planning focuses on reducing the impact of such events when they do occur. Mitigation strategies include actions taken in the form of projects that will substantially reduce or eliminate repetitive losses due to the occurrence of the same hazard. Examples may include but are not limited to such actions as purchasing and relocating property in flood plains, steps to eliminate power interruption during storms, upgrades of storm water systems and water treatment facilities, or storm shelters.