​The landfill and it's services remain available at this time. When arriving to the landfill please pull onto the scale or up to the drive-thru window to speak to the scale-house attendant, as the office doors are locked for your health and the health of our employees.

The Ponderosa Landfill is located at 20028 Gooseberry Lane about six miles southwest of Mankato. It is one mile west of the junction of County Road 33 and County Road 34. 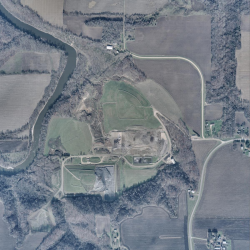 The rates for Bulky Waste will be as follows (prices include tax):

Why will the Ponderosa charge more for Bulky Waste?

The Ponderosa Landfill is permitted to accept mixed municipal solid waste (MSW) and some industrial waste. MSW generally includes most household, office and commercial waste. The Ponderosa will also accept demolition and construction waste, but at regular MSW rates.

Note: Hazardous wastes are not accepted at the Ponderosa.

Certain wastes are not allowed to be disposed of within the fill area of the Landfill, but are accepted as a special waste for recycling off-site. There is a special charge for these items at the gate. Keep these wastes separate from the rest of your load, and notify the gate attendant if you have these:

The Ponderosa Landfill is a state-of-the-art sanitary (MSW) landfill which meets or exceeds environmental protection requirements of Minnesota and Federal Law. The Ponderosa has been in operation since 1972, and owned by Blue Earth County since 1996. The Ponderosa is permitted and routinely inspected by the Minnesota Pollution Control Agency.