Development of the Trail

After the Milwaukee Road abandoned the railroad, a group of citizens proposed development of the Red Jacket Trail from Mankato to Rapidan. As if to mimic the earlier problems, controversy immediately followed. Proponents cited the scenic valley, preservation of the historic high trestle, danger to bikers and pedestrians along TH66, and conservation values. Opponents cited danger to users, loss of farmland, and loss of privacy to adjacent landowners. 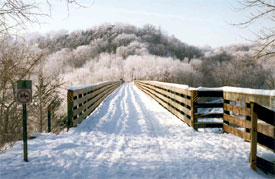 Signing a Petitioning
Local newspapers editorialized and opponents collected 893 signatures on a petition. The DNR and the County lost interest in the project. Within the limits of Mankato, however a private group working with the City purchased the center 30 feet of the railroad right-of-way. A trail was developed from West High School to the southern city limits and this trail was included in the Mankato Park System.

Forming a Task Force
In 1991, the Red Jacket Trail Task Force, organized by a group of citizens, approached the County with a proposal to develop the rest of the trail from the city limits to Rapidan. The group felt with the passage of time, opposing views had moderated. Other recreational trails had been established; and their success, along with emerging conservation and historic preservation values, favored project proponents. The former railroad bed could be acquired agreeably from the 24 landowners and the trail could be developed. The group would acquire the right-of-way, develop the trail, and then turn it over to the County Park System.

Sponsoring Grant Applications
Blue Earth County agreed to sponsor grant applications and to accept the RJT once completed. Adjacent landowners donated about one-third of the right-of-way, one-third was purchased from willing sellers, but one-third refused to sell. After significant controversy, the County Board elected to proceed with right-of-way acquisition using its eminent domain authority.

The project represents a unique partnership of private, County, state, and federal efforts.

Completing the Trail
The Red Jacket Trail Task Force essentially developed the project and turned it over to the County. The group provided overall management, raised about $54,000 in cash, $80,000 in donated lands, and $11,000 in donated material. The County assisted in acquiring right-of-way, sponsored Federal Transportation Grant applications, and the County Highway Department provided labor and equipment when available.

During an open winter, County Highway forces relaid a large deep culvert and relocated a timber trestle from an abandoned rail line in Mankato to the RJT just east of CSAH 33. They also replaced a number of deteriorated culverts and stabilized eroding slopes. MnDOT donated excess right-of-way at the Le Sueur River and created a parking area for trail users. Federal Transportation Grants provided the bulk of funding for three trestle decks and the pavement as well as land parcels acquired through eminent domain. One sector of the trail, from Mt. Kato to the Le Sueur River, was reconstructed as part of the South Route CSAH 90 Project to eliminate two crossings of the TH 66 and add a tunnel under CSAH 90.