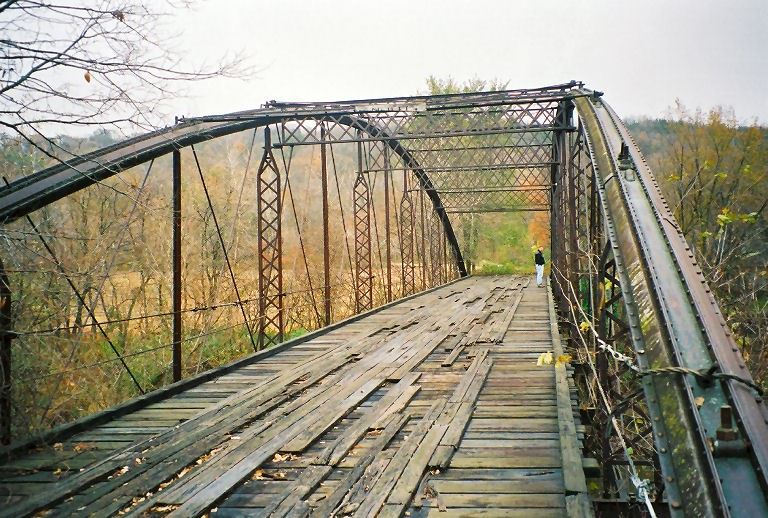 This type of bridge was a popular bridge type from the 1850s to 1880s. Typically constructed of cast or wrought iron, these bridge types marked the transition from wood, stone, and timber building materials to metal. They peaked in popularity in the 1870s and could be found in states throughout the Midwest.

On February 6, 2020, the Kern Bridge was picked up from its location spanning the Le Sueur River and carefully placed along the river's banks to be disassembled and placed into storage.

Due to the design and age of the bridge, this project required intricate structural engineering analysis of the bridge's components strength characteristics as well as a carefully detailed pick and salvage plan in order to maintain the integrity of the bridge structure for disassembly and future re-use in an alternate location. Stabilization of the southeast bridge bearing during construction was also required because the limestone block abutments the bridge sat upon were failing. This stabilization helped to reduce the chance of failure prior to salvaging the bridge.

Two cranes were used during the operation with one crane picking at each end of the bridge because of the bridge's length. A large crane was placed on a rock pad in the middle of the Le Sueur River to lift the west side; another slightly smaller crane sat on the east bank to lift the east side. The bridge was then lifted from its location and set down temporarily while the east crane re-positioned to set the bridge in its final location for disassembly.

After removal, the structure was carefully marked and disassembled into large pieces for future refurbishing and re-assembly.

Future of the Bridge

MnDOT will be soliciting interested agencies to find a new home for the Kern Bridge. Cities, counties and state agencies are qualified. Cities with a population of less than 5,000 must have county sponsorship. A letter of intent followed by a formal application will be needed.  The agency must also rehabilitate the bridge to its historic standards (Secretary of the Interior's Standards for the Treatment of Historic Projects). All FHWA/MnDOT rules and requirements must be followed.  More information will be provided here after March 1, 2020 as they are provided.